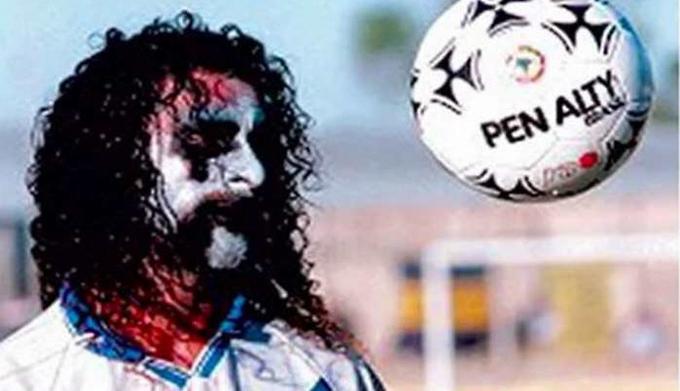 Some footballers have their own hobbies (as well as their characteristics) that are in contrast to the world they are in. Pat Nevin, a former Chelsea midfielder, is very interested in French cinema and the genre of post-punk music. Graeme Le Saux, former English left back (errata: previously written in France), is a devout Financial Times reader. Kasey Caller and Marcus Hahnemann — both former footballers from the United States — are big fans of Tool, a legendary art-rock band (who is also from the US) and often attend live to watch their concerts. There are still many other names with a variety of hobbies that are also eccentric. But this one footballer deserves to be placed at the top level for an eccentric hobby. He is Dario Dubois, an Argentine footballer.

The name of the man who was born in 1970 is certainly not as popular as, say, Kun Aguero, moreover Lionel Messi, the duo of the Argentine megastar over the past decade. His career was only stuck in a number of local clubs that tackled the Primera C and D divisions. Starting from Yupanqui, Lugano, Ferro Carril Midland, Deportivo Laferrere, Deportivo Riestra, Cañuelas, Deportivo Paraguayo to Victoriano Arenas. Dubois is known to people indeed not because of charming individual skills or legendary goals. Furthermore, he is remembered for his difficult position to be contested. And he shows it all in the most concrete way possible. Starting from like to paint his face before competing, too often close sponsors in uniforms with masking tape as a form of criticism. Regarding the ritual of painting the face he used to do, Dubois had leaked his “motivation”. “Painting your own face gives me pleasure, then goes to war to kill your opponent.”

He also had his intention to try out a career in Portugal after knowing Mario Jardel and Ljubinko Drulovic, two FC Porto players at the time, also painted their faces in the last league match against Estrela Amadora and did not get a card. Apart from that, the character of painting the face made by Dubois is actually not just present. He was inspired by the stage act of rock and metal bands that he enjoyed. Dubois is a big fan of KISS and Alice Cooper. That’s why the graffiti pattern on his face also resembles Paul Stanley et al: white paint on the entire face with black mascara on the eyes and lips. Dubois is indeed quite a totality in music.

Even this is the real “world” for Dubois. “I don’t like playing football. I do it because there is a competitive atmosphere and I can also spend time on training. I don’t eat red meat, don’t smoke, drink liquor, especially drugs. After all, the money generated (as a footballer) is also quite helpful. Economic conditions are falling apart. Even though I don’t like football, I’m a Midland supporter, “Dubois said as quoted by one of the Argentine website, En Una Baldosa.

Outside of his career as a football player, Dubois had time to play in three bands at once. The first band was called Tributo Rock which also consisted of fellow Argentine soccer players such as: Carlos Garcia as a guitarist (Deportivo Paraguay), Perico Falco on drums (Midland), Eduardo Paredes as vocalist (Deportivo Paraguay), Maxi harmonica player, then Dubois himself played as a bass player.